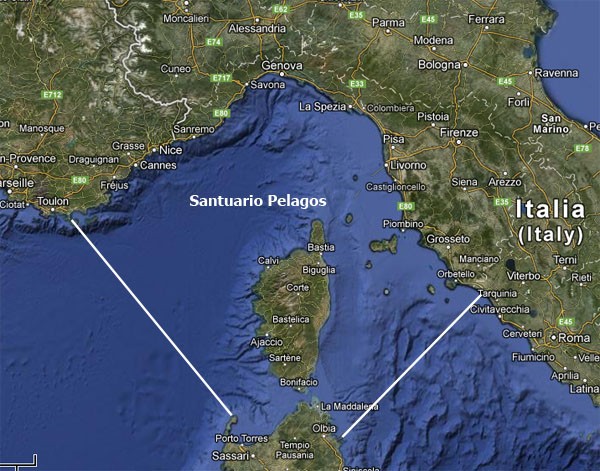 Particular chemical-physical characteristics induced by morphology and water circulation make the stretch of sea between Sardinia, Tuscany, Liguria, Principality of Monaco and France one of the richest in life areas of Mediterranean.

This has meant that since the eighties, many research institutes and environmental associations have begun, first softly and then more and more openly, to want to convince the States to create the first international protected area of the Mediterranean for the protection of the marine environment.

It took almost twenty years for the creation of the Pelagos Sanctuary, years of commitment and work for many people who believed in a project and together they managed to make it happen. Made executive with the Law n. 391 of 11 October 2001, aims to “take…the appropriate measures…to ensure a favorable conservation status of marine mammals, protecting them, together with their habitat, from the direct or indirect negative impacts of human activities”.

The reason why this area is one of the most productive and rich in life pelagic habitats in Mediterranean is the peculiar orography of the coast, which gives rise to an area where particular oceanographic and climatic conditions, such as intense evaporation, nutrients from the Rhone and ascending movements of deep water (upwelling), favor a very high primary productivity compared to the average values found in the pelagic environments of the western Mediterranean.

In particular, upwelling, a phenomenon in which water masses that are found at depths of 100 – 200m and rich in nitrates and phosphates arrive in the euphotic layer (areas where sunlight can penetrate), makes this habitat unique for all species of cetaceans that the Pelagos Sanctuary hosts.

This website uses cookies to improve your experience while you navigate through the website. Out of these, the cookies that are categorized as necessary are stored on your browser as they are essential for the working of basic functionalities of the website. We also use third-party cookies that help us analyze and understand how you use this website. These cookies will be stored in your browser only with your consent. You also have the option to opt-out of these cookies. But opting out of some of these cookies may affect your browsing experience.
Necessary Always Enabled
Necessary cookies are absolutely essential for the website to function properly. These cookies ensure basic functionalities and security features of the website, anonymously.
Functional
Functional cookies help to perform certain functionalities like sharing the content of the website on social media platforms, collect feedbacks, and other third-party features.
Performance
Performance cookies are used to understand and analyze the key performance indexes of the website which helps in delivering a better user experience for the visitors.
Analytics
Analytical cookies are used to understand how visitors interact with the website. These cookies help provide information on metrics the number of visitors, bounce rate, traffic source, etc.
Advertisement
Advertisement cookies are used to provide visitors with relevant ads and marketing campaigns. These cookies track visitors across websites and collect information to provide customized ads.
Others
Other uncategorized cookies are those that are being analyzed and have not been classified into a category as yet.
SAVE & ACCEPT